The Central Bureau of Statistics in Nepal released the Final Report of the Nepal 2014 MICS conducted as part of the fifth round of the Global MICS Programme.

The survey was implemented by the Central Bureau of Statistics in collaboration with the National Planning Commission Secretariat of the Government of Nepal. It was carried out from January to June 2014 and collected nationally-representative data from a total of 12,405 households with a response rate of 98.5%. 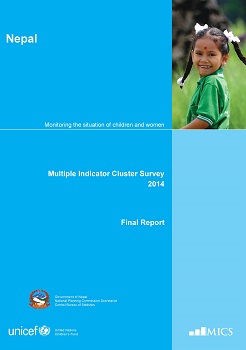 The Final Report is also available on the MICS Surveys page, together with the datasets which were previously released.

The sample of the survey was designed to provide estimates for a large number of indicators on the situation of children and women at the national level, for urban and rural areas, as well as for 15 sub-regions.

Dr. Yuba Raj Katiwada, Vice-Chairman of the National Planning Commission of Nepal, stresses "the importance of NMICS 2014 in providing an important pre-earthquake baseline on how children and women lived in the country and in contributing to the Post-Disaster Need Assessment (PDNA) for earthquake response."

In addition to a Final Report, a child-friendly version has been released which presents the situation of women, children, and adolescents in the areas of nutrition, health, sanitation, and behavioural practices of Nepal. 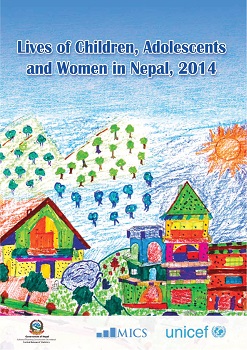 Below are further dissemination materials produced to accompany the release of the Final Report, as well as links to media coverage: