The Palestinian Central Bureau of Statistics released the Final Report and datasets of the State of Palestine 2014 MICS conducted as part of the fifth round of the Global MICS Programme.

The survey was implemented by the Palestinian Central Bureau of Statistics, in collaboration with the Ministry of Health, and its results will serve as baselines for the 2030 development agenda. 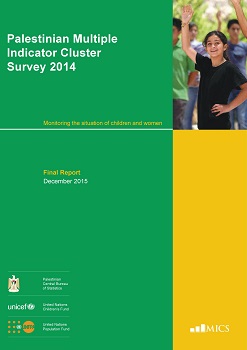 The Final Report is also available on the MICS Surveys page, together with the datasets.

Data collection was carried out between March and April of 2014. This is a nationally representative survey which covered a sample size of 11,125 households located in two geographic areas -- the West Bank and Gaza Strip -- and achieved a 96.3% response rate. The survey used three questionnaires: the Household Questionnaire, the Questionnaire for Individual Women (age 15-49), and the Questionnaire for Children Under Five.