LARGEST ROUND OF MICS

Countries are turning to MICS to monitor the SDGs, prompting a groundswell in the number of surveys in MICS6

An increasing number of countries are looking to MICS to monitor progress toward the SDGs especially for their most vulnerable groups. MICS measures data on the status of children and women, including on over 30 SDG indicators across 11 goals. This represents close to half of the SDG indicators that can be monitored using a household survey.

Similar to previous rounds of MICS, many countries have elected to implement national surveys. However, a sizeable number of countries have also chosen to implement sub-national surveys to cover the needs of specific geographic areas and special populations where data gaps exist. These surveys can capture equity data on minority groups not well-represented in a national level survey. In MICS6, 5 surveys on the Roma population will be implemented in Montenegro, The Former Yugoslav Republic of Macedonia, Serbia and Kosovo (under UNSC res. 1244). Pakistan has 5 sub-national surveys in different states.

The interest in MICS has resulted in a stark growth in the number of surveys in the sixth round. With a total of 67 surveys that are in progress or planned, the sixth round of MICS has the greatest number of surveys in the history of the programme. And this number is expected to grow over the next year as more countries join MICS. While West and Central Africa (WCAR) traditionally has the most surveys, in MICS6, currently Europe and Central Asia has the most surveys with 17, compared with 12 in WCAR. A number of countries also joined MICS for the first time and plan surveys in 2019-2020. Some of these are Fiji, Honduras, Nauru and Samoa. 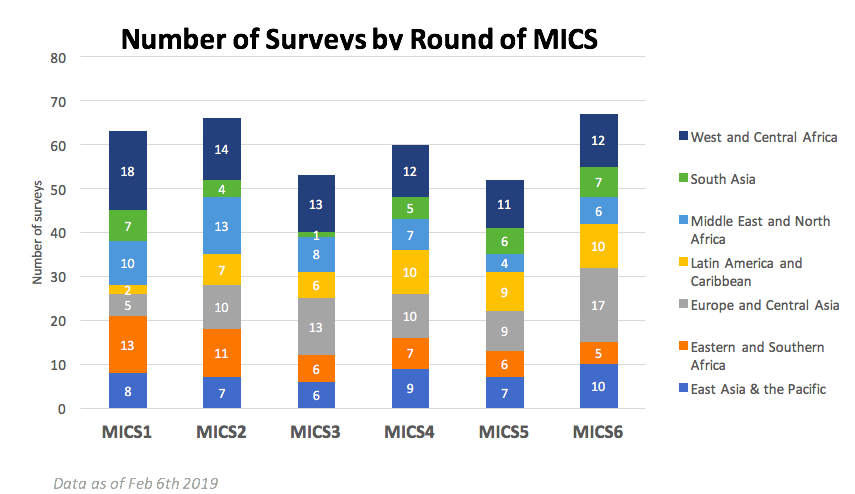